SOME WORDS FROM PEOPLE I’VE WORKED WITH:

“Chris Collins is a seasoned professional and is always my first choice when needing a good drummer for a tour or shoot.  He learns the songs quickly and plays them back exactly as I need them.  He is punctual with call times and doesn’t complain if it runs over.  Chris is always super friendly to fans and is a team player.  He plays his role well and nothing is more important than not having to babysit a player when organizing a big project.”
-Johnny Lee, “Hotel Lobby”
http://www.thehotellobby.com
—————————

“Chris is a professional drummer who knows a myriad of styles and techniques and is also a stand-up guy with attention to details, deadlines and a fair price.  He is a clear communicator which makes practices, learning, load-in, and show events go seamlessly.  Chris learned an entire set list of progressive music and played flawlessly at the show with only 2 or 3 rehearsals.  I loved how he both listened to my vision but also offered a healthy amount of suggestions to make our band much better than it would’ve been without him.  I’ve worked with at least a dozen drummers in the LA area and Chris is the “keeper.”

“Chris Collins is an engineer’s dream. Not only is he an exceptional drummer, which makes my job ten times easier, he is a charismatic dude who is easy to work with and willing to experiment. With Chris, doing punch ins and outs was a breeze, and it allowed us to create some really interesting drum parts. It was obvious from the get go that this man LIVES drumming. He’d be a vital asset to any project. “

“Chris Collins is an awesome drummer to work with, not only is he extremely solid with the click track in the studio (The guys a human metronome!) He also brings HUGE energy to the stage behind the kit, energy other drummers need to take note of!” 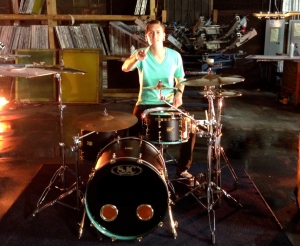